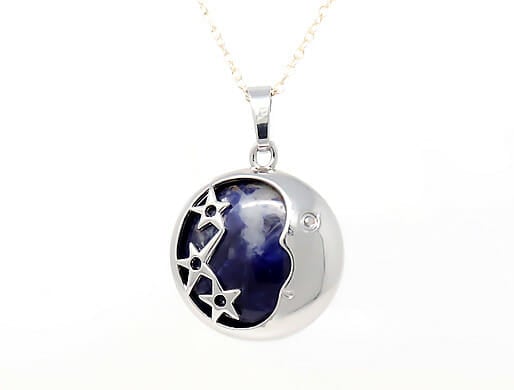 Despite its deep rich beauty, Sodalite is not a stone familiar to many of us. Far from a simple rock, sodalite is a mineral most popular for its use in such notable structures as statues and even pyramids.

So named for its sodium content, its mineralogy designates it as a feldspathoid (a mineral consisting of a framework of silicates). Increasingly, one particular advantage of the stone’s deep blue luster lends itself to the design of sumptuous, intense blue jewelry designs including sodalite bracelets and sodalite necklaces.

With a hardness of 5.6 to 6.0 on the Mohs scale, Sodalite possesses durability as lapis lazuli, a stone often viewed interchangeably. Although the two stones are not the same, lapis lazuli often include modest amounts of sodalite itself.

Similarly, the deep blue with delicate swirls of its white veining are responsible for its mischaracterization as a lapis lazuli stone.

Sodalite is popularly used as a meditation stone, believed to possess healing energy and to provide clarity of thinking and spiritual growth.

The Essence of Sodalite

The stone’s origin and quality are often interrelated: its color, determined by its source, its corresponding exposure to ultraviolet sun rays, as well as its impurities present a signature of its birthplace. As an example, stones originating from Canada tend to show a violet hue as they are unearthed from their mines.

Following exposure to the sun, their coloring naturally transforms into a luminous gray complexion. Stones from other geographies in the East may begin their lives as white, but a transition to violet is a result of the exposure to their native sun.

The Origin of Sodalite

The largest deposits of Sodalite were unearthed in Canada in the 19th century, with the most significant quantities mined in British Columbia. Another region famous for the deep blue variety of stones is Namibia.

Today, the United States is responsible for significant quantities of sodalite, along with Greenland, Norway, Brazil, and several other geographically dispersed mining sites.

Caring For Your Sodalite Jewelry

Due to the delicate nature of the gorgeous blue mineral stone, it is best cared for by storing it in a soft cloth when retiring it for the evening. Cleaning your Sodalite with a soft cloth will extend its luster and protect it from scratches possible from dirt or other foreign matter. Importantly, it is best to avoid its interaction with other stones in other jewelry such as pendants or rings that may come into contact with your elegant blue showpiece.

Giveaway – The Results Are In…

Citrine Quartz The majority of the mined citrine comes to us from Brazil where the natural geothermal process creates the highly desired warm yellow gemstone. The glamorous citrine quartz crystal, with its cheerful sunny shimmer, is ideally named for the lemon-yellow glow of this lovely stone. In fact, the meaning of its name comes from…

The Kasumi Pearl When I saw my first Kasumi Pearl, I was pulled into the aura to its natural luster and its organic appeal.  I was drawn by the warm reflection of light from each pearl as it glowed like a luminous moon. What’s more, the complete string of Kasumi pearls warms to the skin…